Next Year in Jerusalem - Passover 2020 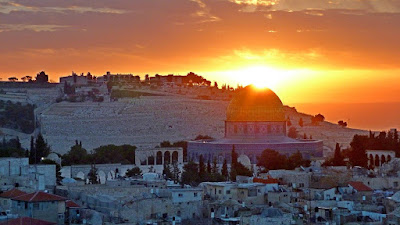 I wanted to impart some words of wisdom to everybody, because it's no coincidence that Devon and I are here in the Holy Land this year.

I want to tell you a quick little story.

A year ago, Devon and I were sitting in Las Vegas doing our Seder, the two of us, and we said, “Next Year in Jerusalem,” knowing we were making Aliyah and moving to Israel.

And yet here we are, a year later, living in Israel, and we still have not been to Jerusalem.

I had a problem with the line that we recite at the end of the Seder: “Next Year in Jerusalem.”

Which caused me to think and reflect on it. I’ve come all the way to Israel, and I have still not made it to Jerusalem. What does that mean?

I really wanted to figure out what that meant. So, I went to Google, which is what I always do. I Google everything.

I already knew that your location can matter in the Jewish tradition.

For instance, we arrived here in November, in time to celebrate Hanukkah. One of the symbols of Hanukkah is the dreidel which has four Hebrew letters – nun, gimmel, hey, and shin. The letters spell out the phrase “A Great Miracle Happened There.”

But here in Israel, one of the letters on the dreidel is different. The letter “Shin” is replaced with a “Pey.” Which changes the phrase to “A Great Miracle Happened Here.”

Knowing this, I thought, what does that mean in terms of the Passover Seder? What do we say here in Israel, when you’re already here? Except for Gillian and Devon, of course, who have not been to Jerusalem yet.

Surprisingly enough, I discovered that being here in Israel doesn’t matter. Everyone still closes their Seder by reciting the words, “Next year in Jerusalem.”

So that motivated to do even more research. Why no change?

I came across a rabbinical explanation. There's a Midrash (Jewish folklore) that says… you can be miles away from Jerusalem even while living there, and, you can be on the other side of the world but only a step away.

Jerusalem is more than a city. It’s an ideal we’re trying to reach. Jerusalem is not a place. Instead, it’s a state of mind.

And if we look at the Passover story, we start in Egypt. At the beginning of our journey, we're in Egypt, which is about our limitations. It's about slavery and restrictions. At the end of the very long journey is Jerusalem, which is about freedom and peace.

If you look at the Hebrew word for Egypt, it's “Mitzrayim” which means limitations, restrictions, and obstacles.

We’re actually in that right now. All across the world, we’re in lock down. We're all experiencing restrictions and limitations.

If you look at the Hebrew word for Jerusalem, “Yerushalayim” means the city of peace. Which is an incredible state of mind.

And I think that's very appropriate that this year we're really reenacting that journey. Here we are in a period where we feel very restricted. Very locked down.

But what I would tell you all is that when we say “Next Year in Jerusalem”, we not saying we’ll get there sometime in the future. Instead, we see it coming soon. We're moving towards that place – not only as the Jewish people, but as individual people ourselves, all across the world.

Collectively, we're moving forward to a time when we will be more centered and more at peace.

So at this time of Corona Virus, I think we can all embrace that feeling of renewal. Seeking peace. Bringing that light into the world.

But it only takes a single light, just a single match, can eradicate the darkness. We can be that bright light.

And I'm honored to be here with all of you today to celebrate this beautiful holiday because Passover is about renewal, and I love that it's not just for Jewish people.

This is for everybody, because we all want this Corona virus to pass over us.

The Corona virus is something that is affecting all of us. It's not just happening to those people.

It's happening to all of us, and it's uniting us in a terrible way. We're being told to keep our distance from each other.

And yet, the only way we can fight this is by holding hands and moving forward together.

And that's exactly what the Israelites did when they left Egypt. They held hands. They moved forward.

They walked into that water, which is only when the seas parted.

It wasn't about the seas opening up for them. It was about moving forward and going in the water. And then the seas parted.

I think that's what we need to be doing with this Corona virus.

We need to move forward, hold hands, and know that we're all in this together. We're going to get to the other side.

And the other side is Jerusalem, the city of peace.